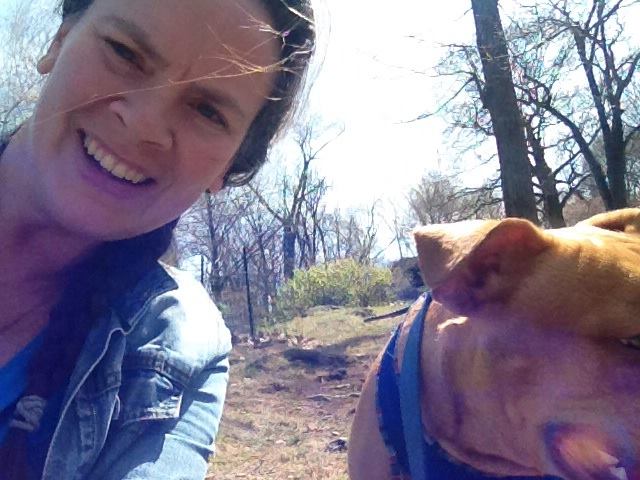 During the week, Kenobi and I walk early every morning and every evening when I get home from work. We come into contact with friendly people walking dogs in the a.m., and seem to be confronted with less-than-firendly people in the afternoon. Not all of the people, you understand, but there do seem to be more quarrelsome encounters later in the day. Perhaps it’s the fact that there are more people out and about at that time.

Anyway, yesterday on our walk along a park, where there is excellent squirrel sightings, we witnessed a doggie commotion ahead of us. A smaller dog was aggressive toward a pit-bull mix, and the put-bull mix snarled and barked at the smaller dog. There were some women who turned to look, and then turned back around. One made the comment, “They shouldn’t be allowed in the city–pit bulls.”

This woman didn’t see the interaction, I guess. But, if we’re going to ban certain dogs, let’s get our evidence to prove why it is necessary, shall we? First, this particular pit-bull mix was minding her own business sniffing along the path and searching for squirrels when the smaller dog approached her in an aggressive manner. Not the other way around. The pit-bull type didn’t attack. She told the dog to back off, if my dog-speak is accurate. There was no damage done. The owner called her back as the other dog owner jerked her smaller dog away, and everyone walked on.

This gets under my skin. The woman who made the comment did not see what happened. She just made assumptions based on the appearance of the dogs. There have been quite a few times that dogs come after Kenobi for no apparent reason. Once, we were walking by another dog owner with two small dogs, and one of the dogs jetted across the sidewalk to let Kenobi know he didn’t like him. I tripped over the dog/the dog’s leash. Kenobi looked at me as if to make sure I was all right, looked at the dog, and turned away to continue walking. He didn’t retaliate, didn’t bark back, and made no motion toward the dog at all. But the woman gave me a nasty look as if we had done something wrong. Another time, a small dog nipped Kenobi’s nose leaving a scratch. The owner didn’t even apologize. Just because your dogs are small doesn’t mean you don’t have to train and control them. Kenobi has gotten his nose nipped, been snarled at, and has never retaliated. He looks at the dog, and then snubs it and walks away.

Now, I know I’m giving Kenobi human traits here saying he snubs these dogs. But he does. There’s no other way to say it. He really does look at them and turn his head away and leave. I reinforce this behavior always saying, “Yes, good dog.” and petting him. Perhaps it’s my teacher training, but I firmly believe in positive reinforcement.

At any rate, we need to clean-up this reputation and educate people. Any dog may be aggressive. ANY DOG. Don’t blame the pit bulls for your dog’s lack of training and obedience. Maybe the more people who come in contact with a friendly, loving pittie, the reputation will adjust accordingly. This is my hope, and why this is one of the goals of our ultimate road trip. It is also why I hope to support the rescue of dogs that are neglected, tortured, and then trained to be aggressive.

One thought on ““They shouldn’t be allowed in the city.””